Ok, so after a week, I think I am finally up for going into detail about the party. It was so much fun to plan, exhausting, and then recouping from the party has taken much longer than expected.

The food was wonderful and EASY. We had so much stuff that didn't have to be cooked. Here is a picture of Chef Mickey's kitchen... 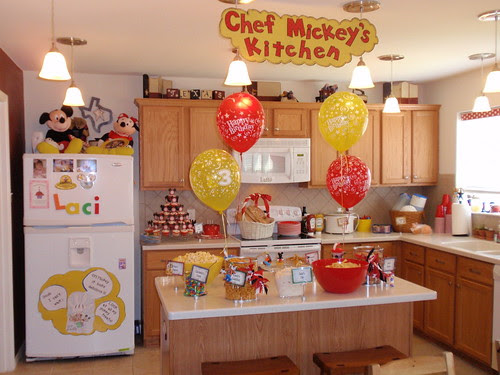 Here you can see a clear shot of Daisy's Donuts. I ordered 20 dozen (yes 20 dozen, and well over 15 dozen were gone before the party ended). This was easy and pretty cheep. I ordered them from our favorite location the weekend before and went and picked them up the morning of the party. It was GREAT! You can also see the chips and dip... The little tag for this read Dale's Dip. I know what you are already thinking... the little tags are TOTALLY unnecessary! But aren't they cute? Just wait, it gets better. 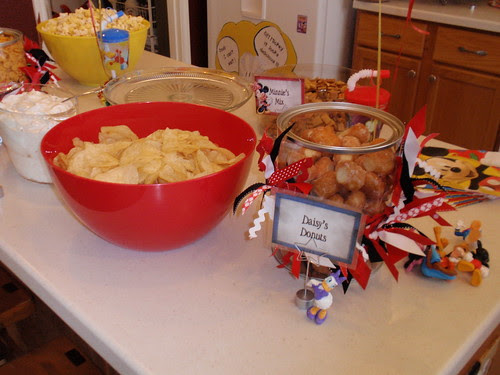 Here from left to right you have Pluto's Popcorn, Clarabelle's Candy and Goofy's Goldfish. For the popcorn I went to our local popcorn store called Popcorn Papa and bought a bag of plain regular popcorn. Why? Because I didn't want my house smelling like popped popcorn and I didn't have to worry about it burning - a good $7.00 spent in my book! The candy is MnM's and just bought a big bag of them at Sam's Club. I also got the goldfish at Sam's which was great because they make a great snack for later. 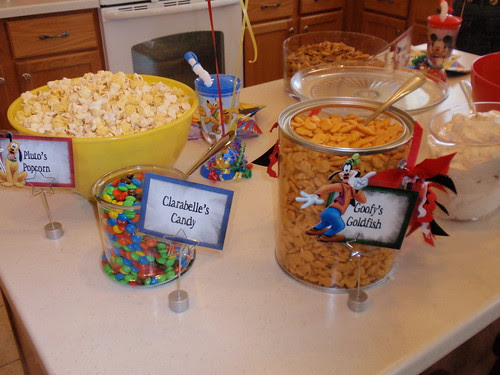 I did miss getting a good shot of Minnie's Mix and the fruit bouquet from Edible Arrangements, these are about as good as those shots got. 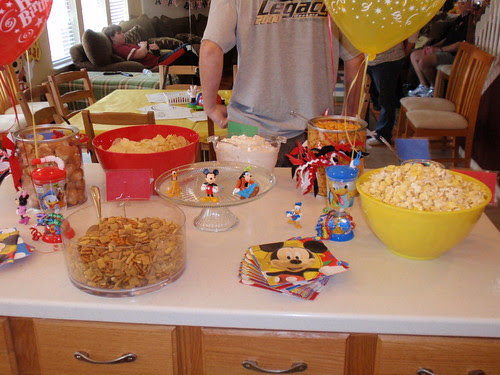 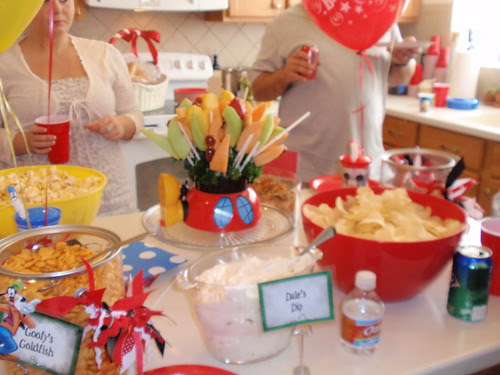 Next we had our hot dogs... ahem... I mean Donald's Dogs. I hate having bun packages all over the counter, and this basket just made it all CUTE! Don't you think? Oh, and this was the only cooking we had to do the day of the party, but I don't really consider putting hot dogs in a crock pot cooking, but they were GOOD! 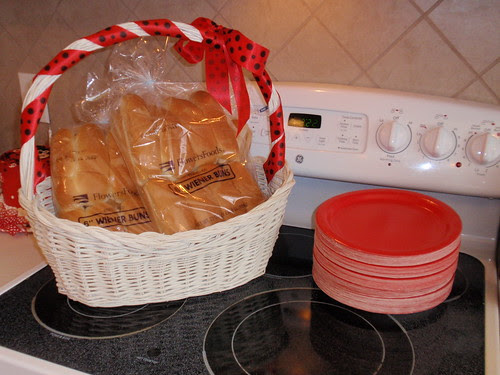 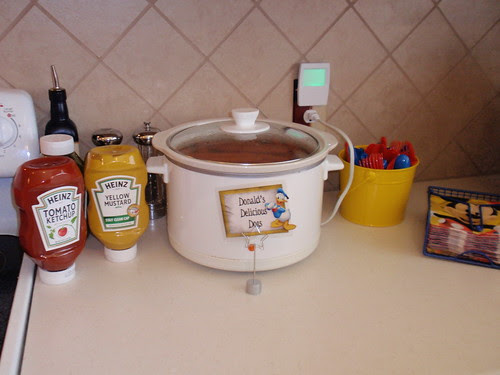 Toodles also had a food item, it was Toodles Tea... clearly from the picture we forgot to start making it until the party started... eh, it was still fine since we had so much other stuff to drink in the coolers outside. 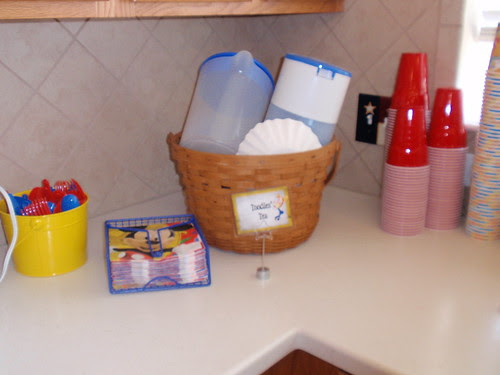 Now onto my favorite things from the day food wise. First something I didn't make... The small 6" cake that had the candles in it. This was from Say it with Sugar in downtown Wylie. Let me just say.... YUMMY and CUTE! All she did was blow out these candles and as a family we ate this the next day. 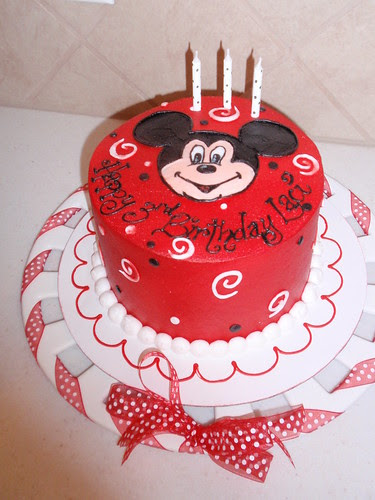 One of my favorite things was the cupcake tree I did... I made all the picks on the tree with my cricut using black paper for the Mickey Heads and sticker paper for the 3's and Happy Birthday Laci centers. What do you think? 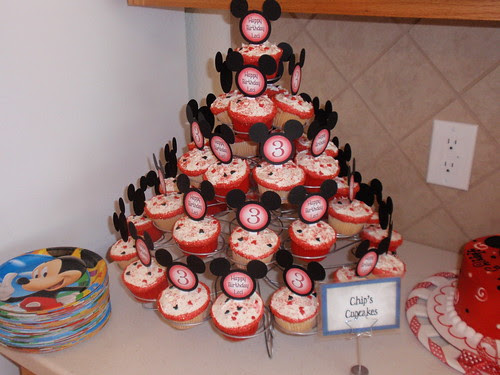 My favorite thing of all was the dessert stand. Yummy!!!! Here is a picture of the whole thing and then I will talk about each one. 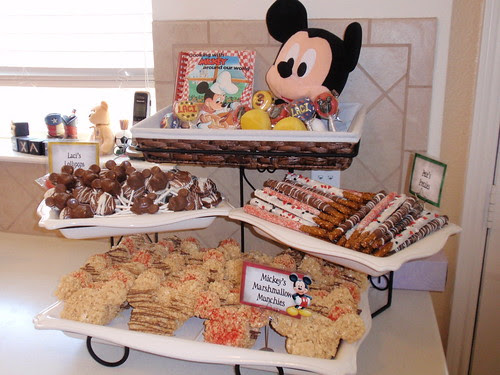 First we have Laci's Lollypops. These were a mix of chocolate Mickey heads (used a mold found on Ebay - I don't remember which company I bought it from though but it was pretty inexpensive) and dipped Oreo pops. Quick note that White Oreo's are better for dipping as they are not as breakable (if you want more information on how to dip these, just let me know). Thank you to my mother in law for being a dipping expert on this one. I was nervous trying them, but she was done before I could blink my eyes and they were sooo good!!! 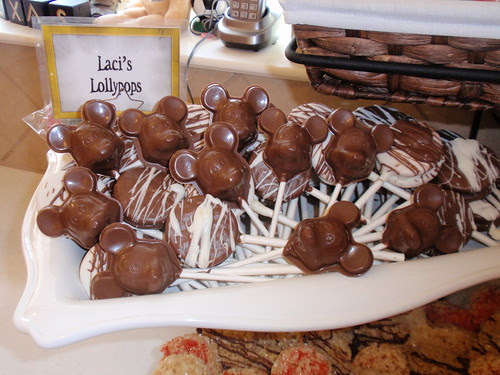 Next was Pete's Pretzels. Now I kid you not, that had we bought these pretzels at Say it with Sugar they are $1.00 a piece. Hello, earth to Say it with Sugar.... I made like 80 of these in about 20 minutes. If I had bought them from you I would have spent over $80.00. Um, no thanks. To do these all I did was take Almond Bark, melt it in the microwave in a plastic bowl that was safe in the microwave, and then once it was liquid enough used a spoon to pour over the pretzel. Then I laid it on parchment paper. Pretty easy and well over 1/8 of the price. While they were still wet we decorated them how we wanted except the drizzle ones we waited until they were hard. 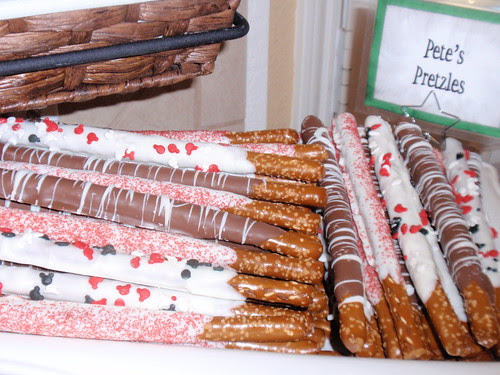 The biggest hit of the day was the Mickey's Marshmallow Munchies. My mom has a secret for her Munchies... they are always so good! We used the cookie cutter we got in January to make these, both adults and kids alike were all over them. Now as a suggestion. When you go to make these and mold them. Instead of cutting the Rice Crispy Treats, you need to pack it in the mold from the top. It is not only easier, creates less waste, and have clean edges. Now as a quick note spray the cutter, your parchment paper and your hands in Pam, just thank me later for this note. 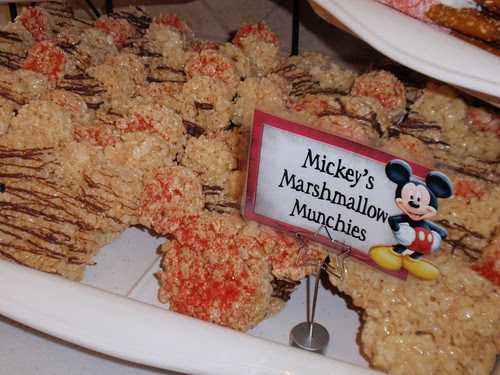 Are you tired from reading this yet? Well lets just say, I still have much more to post about, but for today I think the food says enough.