So I am totally behind in the planning for this years party. I am hoping in the next couple of weeks that we get on the ball and get more of the decorations done so that I feel better. Last night we did finish all but one or two of the sayings for the walls.

Here are some in action shots using this amazing machine that is basically a cricut/silhouette on crack and doesn't have to have a mat. You lay it on this board thing that suctions the paper down. Because of this we can go cheepo and use construction paper. Uhm... awesome!

Here is a sample of some of what we cut out: 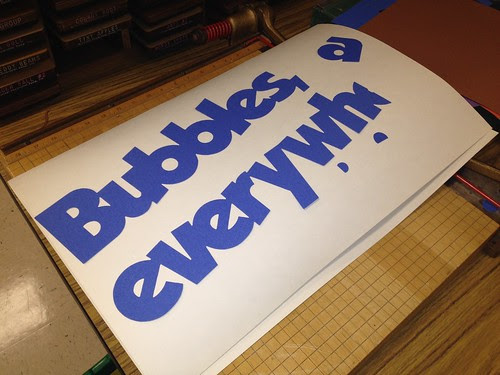 Here is my beautiful mommy with the machine. 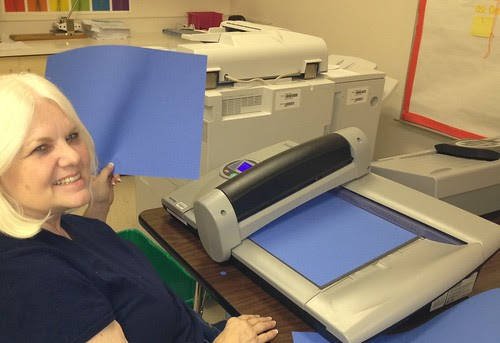 Here are some more action shots of the machine... 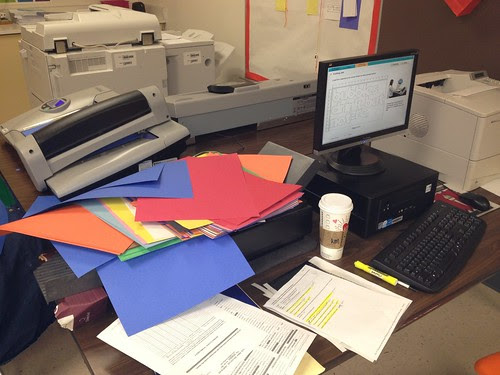 (yes there is a starbucks white mocha on the table... it fuels me) 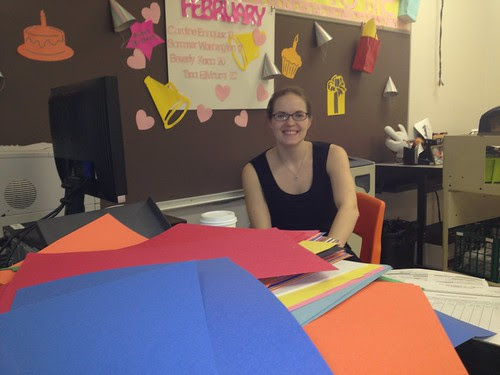 This is me looking kinda scruffy, but turn about is fair play, I did take a picture of my mom, so she took a picture of me. I am still unconvinced that I look that tiny. Maybe it is because I look at myself in the mirror daily, but the number on the scale doesn't seem to coordinate with what I see in the mirror. What gives yo? Although I must say, my legs and tummy aren't in this picture and this is where I see the issues that I am referring to. Aside from that I need a good tan.

Here is an up close before taking one of the cuts off the machine. You can barely tell there are cuts, but there are and it is AWESOME!!! 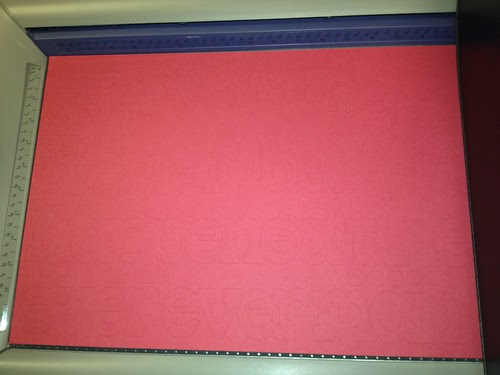 Anyways, next time I go up there we are going to start on the characters, but would you believe that it actually took us almost (3) hours to do the sayings. No joke... I'm serious!

I was lifting her into her crib, teaching her to write her first name, making sure she wouldn't fall off the playground equipment, buckling her in the car seat, she cheered me on during my BIG day (college graduation), working on her back roll and so many other wonderful memories...

Now today, she is jumping up on her big girl bed, writing her full name (first, middle and last), can recite our address and phone number by heart, plays on the playground while Jake and I sit idly to the side enjoying watching her climb and have fun not worried at all if she will fall, buckling herself in the car, about to graduate from Pre-K at her school, can do (3) back walkovers and working on her back hand spring, a plethora of random amazing things come out of her mouth every single day, and just when I don't think I could love her more she says things like... "Mommy, you rock!" She has blossomed into a beautiful little girl who although at times is a little stinker, she is my little stinker and she is a blessing to be around.

Yesterday we converted her to her "BIG GIRL BED", my small short little munchkin had out grown the current conversion of a day bed and it was time to convert. Laci helped us choose her bedding and we went with a beautiful purple which complemented her room decorations perfectly.

Here is my soon to be 5 year old, getting bigger every day, making me more and more proud and becoming so independent. 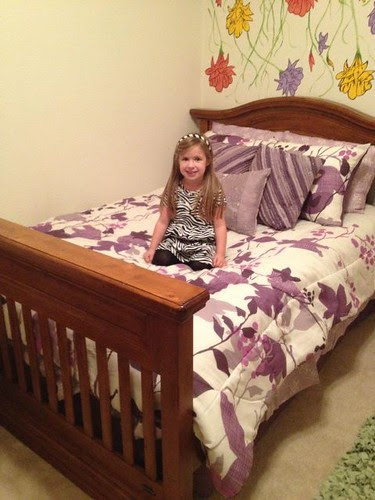 Football Season is OVER - Congrats to the Giants 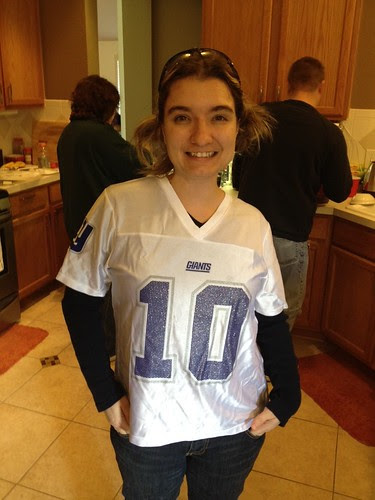 Isn't she super stinkin' cute! I heart this chick... she is actually the reason I met my hubby... I am forever in debt to her for this. Well if you couldn't tell, Tia is a Giants fan... I am here today to show you just how big of a fan she is and how I aided her in decorations and clothes for her party/kids.

So one day last week when I was playing driver to my hubby and munchkin for doctors appointments I got to sneak in 2 hours of crafty time with my buddy. Tia wanted to make clothes for her kids instead of buying them jerseys that were EXPENSIVE!!!

So we used the silhouette to trace the logos we wanted and used some heat transfer vinyl from Craft Vinyl (Yo Nick... You rock!) who has the best prices and service ever!

Here are her two adorable munchkins all decked out in their Giants gear... The shirts and pants total were $30.00 and then $6.00 for the white t-shirt vinyl. So for $36.00 they both had two custom outfits that they loved and rocked like mini rockstars! 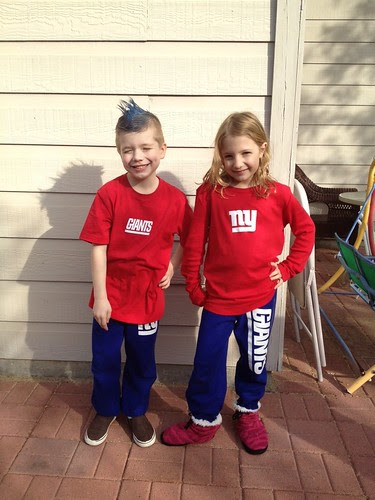 Her son loves Cruz #80 and her daughter loves Manning #10. 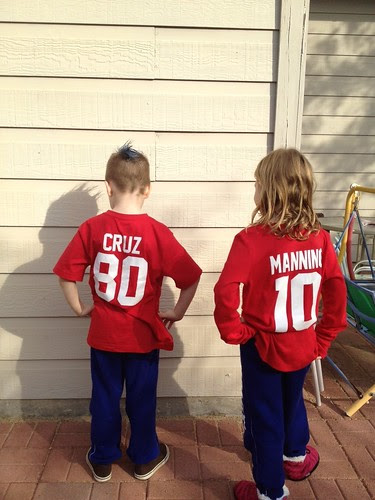 Of course he wanted his hair blue... Crazy kiddo! 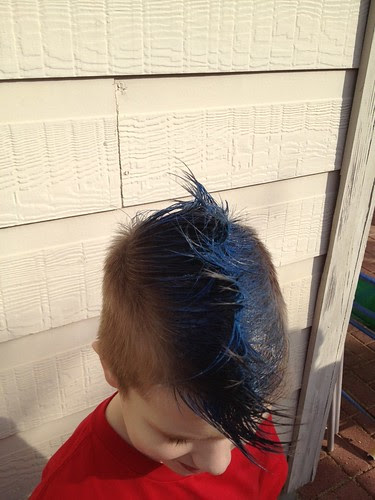 Because Tia was doing a buffet style party she wanted to have confetti for the Giants... here are the awesome pictures of her spread... note the super cool confetti that I helped her make... *** BTW I was lamesauce and didn't go... dude I am not into crowds and had a mini party of my own with my mom, hubby and my munchkin *** 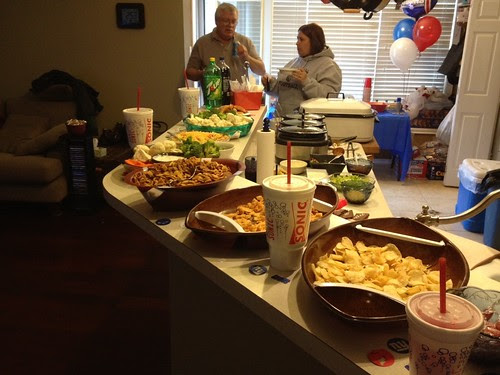 YO Tia... what gives with all the Sonic cups... 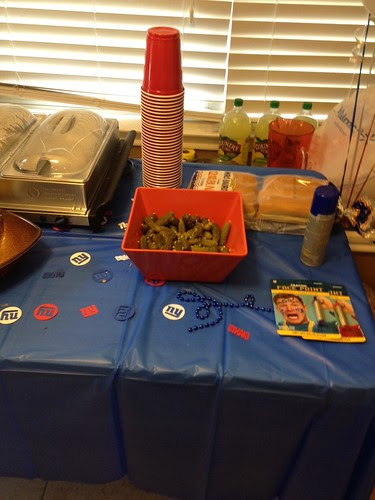 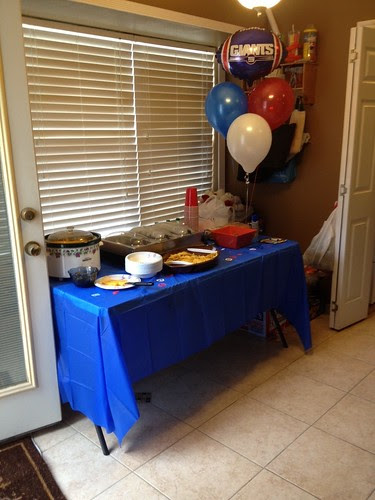 I love the balloons! 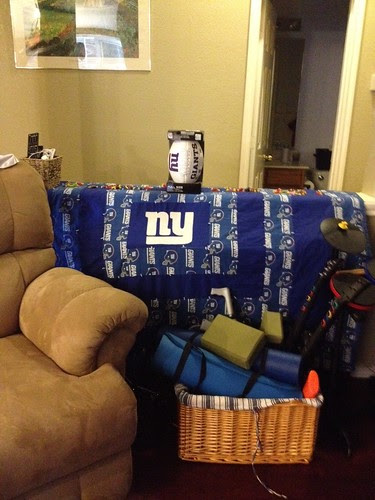 I am pretty sure every where you turned there was Giants stuff roaming about! 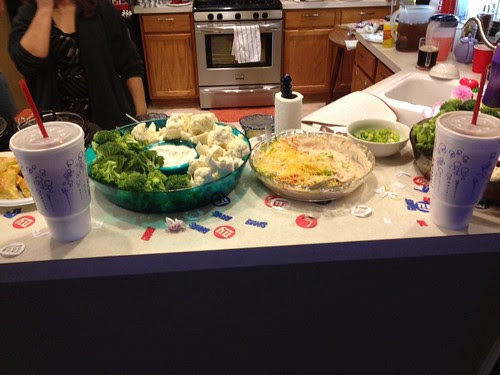 Also, I am positive NO ONE went home hungry!

Last but not least was a parting gift from one of the pieces of confetti. Tia thinks it is just an awesome reminder of a great day! A piece of confetti got wet and was in her sink overnight. Look at what happened! Any suggestions to get it off? I already suggested bleach and a Mr. Clean sponge thing.... 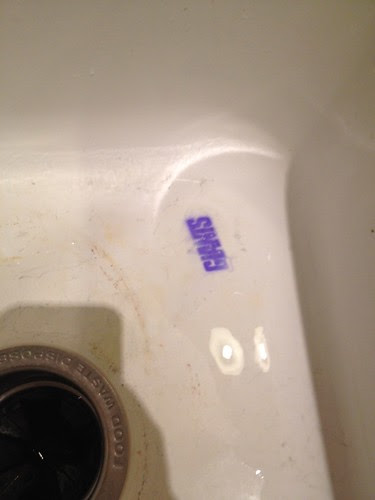 Looks like everyone must have had a great time! What an awesome end to that game too. I personally had no pull either way because the Cowboys were not in it, but because of Tia I figured I would root for the Giants! So, go Giants! Hope everyone had fun with their friends and family regardless of who won or lost the game!

If you know me personally, you know that I have been incredibly busy the past couple of months. My blogging has suffered and I am sorry that you have missed me. Oh, come on.... you know you have!

Anyways, party planning has already commenced and I have already started to think about decorations and am actually 4 weeks behind on this part. EEK! But the cake and face painters have been ordered/scheduled which are 2 major components, I still need to order the bounce house... but in all relativity... this is nothing. I mean I still have time right... WHAT DO YOU MEAN I ONLY HAVE 57 DAYS... CRAP! I have a lot to do!

But the invites have been started and now need to be printed and assembled.

Oh, you would like to see the prototype? Sure! I am so happy to have found Serendipity Soiree on Etsy! They were a pleasure to work with and I am very pleased with what they offered and what they created for me, errr... I mean Laci!

So for the outside I wanted the wrapper like in the movie, the back side I did a little editing on because I didn't like the Nutritional Info or the bar code provided. But that was some quick editing and it is all good now. For the golden ticket I really wanted gold leaf paper like in the movie... but seriously there is a plague for me trying to get golden tickets, I searched high and low for months. Below is what the Etsy site put together for me. I am even going to print gold on the back side so that they are gold on front and back. Oh, and you better bet the golden ticket will be in the chocolate bar! I am no amateur... it's going to be done right!

So here are the pictures: 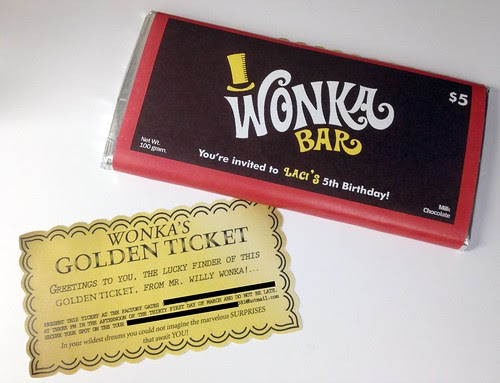 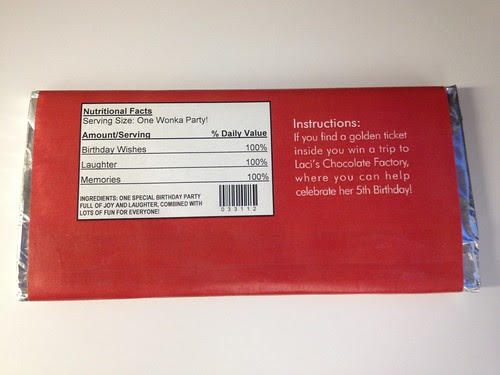 I am so totally in love with the fact that with the Silhouette Studio program I didn't have to cut these out by hand. Huh?!? Yeah you read that right! I popped the graphic into the Silhouette Studio program and then did the trace function around the tickets. After I did the trace function and was satisfied I PDF'ed the ticket with the print and cut feature.

I took the ticket and had it printed and then popped it onto my silhouette mat which cut the three tickets in seconds and all I had to do was sit back and admire my handy work. It was the first time I had used the silhouette print and cut feature and darn if it isn't the handiest thing EVER!!! I am going to be ordering more blades and cutting a LOT of stuff with that thing by using that amazing feature.

Have you used the feature? I bet if you haven't you want to now!

So since I LOVE COMMENTS, I would LOVE to hear what you think about the invitation part 1... oh come on, you know it is only part 1... I have to have a reminder magnet too!